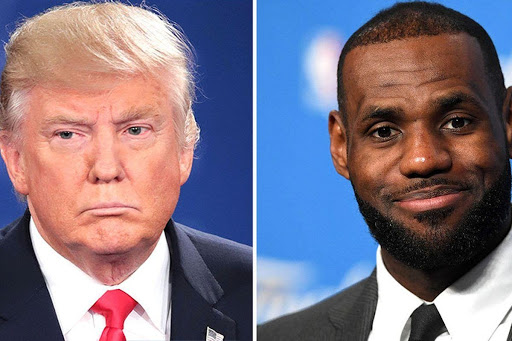 The President of the United States- Donald Trump – expressed his dislike for LeBron James in Rush Limbaugh’s radio show.

When speaking about the Los Angeles Laker superstar talking against Trump and his presidency and talking in favor of the Black Lives Matter movement, Trump chose some interesting words. “The NBA has become so political that nobody cares about it anymore,” he said.

Interestingly, these two popular names have clashed before as well. Two months ago, Trump stated that he would start watching NBA games only if players stopped kneeling down during the National Anthem. He also called peaceful protests “unacceptable” and added that apart from Abraham Lincoln, no other president had done as much for the Black community as he has.

When reporters questioned James regarding Trump’s comments, he said: “Are you trying to make me laugh right now?”

“I really don’t think the basketball community [is] sad about losing his viewership, him viewing the game,” the NBA star said. “And that’s all I got to say.”

Moreover, he stated that he did not wish to focus on Trump. Instead, he used up that time to push people to vote. “I hope everyone, no matter the race, no matter the color, no matter their sides, see what leadership that we have at the top of our country and understand that November is right around the corner, and it’s a big moment for us as Americans,” he said.

James added, “If we continue to talk about what we want better, we want change, we have an opportunity to do that. But the game will go on without his eyes on it. I can sit here and speak for all of us that love the game of basketball. We [couldn’t] care less.”