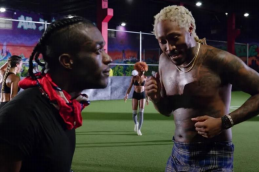 Future and Lil Uzi Vert, who are frequent collaborators, have again partnered up to  release the new album Pluto x Baby Pluto, featuring 16 songs that are interestingly  feature-less. Moreover, can also now enjoy the video for the song “That’s It,” which  Nils and Wheezy have produced as both of them seem to be enjoying lavish in their  Auto-Tuned. This visual has come courtesy of Hype Williams, who was the person  behind the cryptic promos that came right before the release of Pluto x Baby Pluto. In  this video, viewers can witness the artists in a tropical forest as well as a football field.